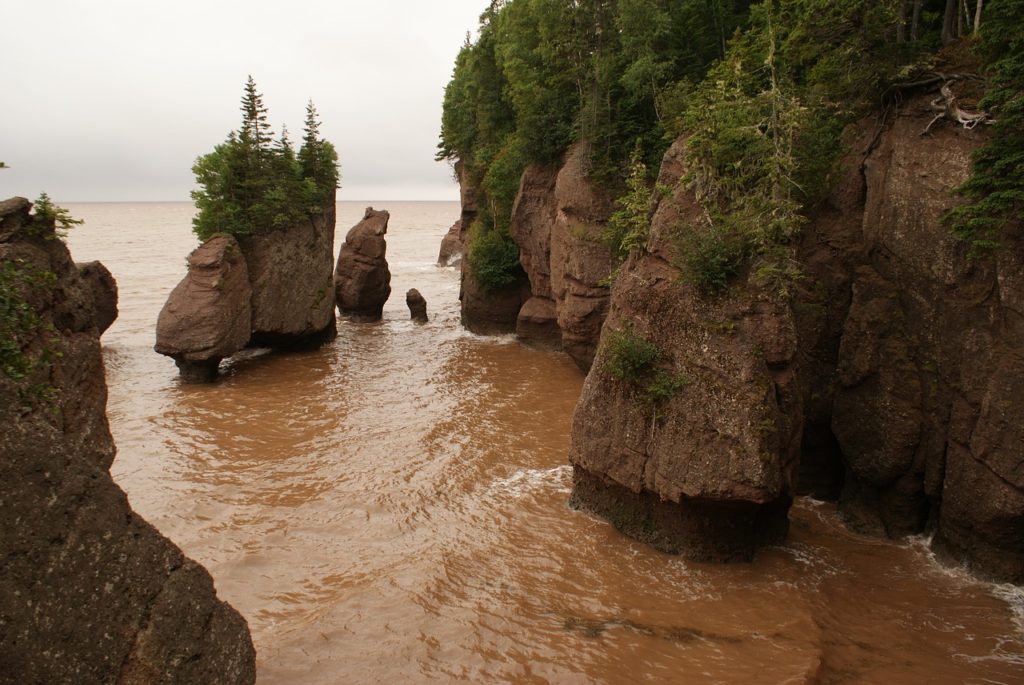 Looking to go on a Canadian holiday that takes in the underrated and unnoticed? Chart your course for New Brunswick, the largest of the Maritime provinces.

Viewed wrongly by many travel writers as a drive through province, there are many attractions that are well worth your time in this special place.

Below, we’ll review a few of the things you can get up to on a holiday in New Brunswick.

After a quick stop in Moncton to shop for bargains, make your way down the Fundy Coast to the Hopewell Rocks.

Also known locally as the Flower Pots, they are a series of tidally-eroded sea stacks that stand 40-70 feet above the exposed ocean floor at low tide.

Situated close to the head of the Bay of Fundy, which is shaped in a way that induces some of the greatest tidal differences in the world, 30-50 feet of seawater surges in and out in two full cycles per day.

Depending on the time of your visit, you can either walk under these stone giants or paddle a sea kayak around them – whichever you end up doing, it’s sure to be the highlight of your visit to New Brunswick.

Stuck waiting for the tides to be right? Don’t be glum about it – fire up your tablet and load up your favorite gaming site.

With an attractive LeoVegas bonus for Canadians just being announced, you’ll have plenty of potentially profitable gaming action to keep you busy until the time is right to see the Hopewell Rocks.

The highest tides in the world manifest themselves in more than sea stacks that look like giant flower pots – in the city of Saint John, the influx of water as high tide meets the out-flowing Saint John River, resulting in a wrestling match between the two.

For a brief time, the rising waters of the Bay of Fundy will overcome the river, forcing it to flow backward.

This also creates whirlpools, making for an amazing scene during the brief time this phenomenon happens.

Check with the local tourist office, and they will be able to tell you when to visit to see this amazing natural event.

Named recently as the best place to visit in Canada by USA Today, St. Andrew’s by the Sea is a delightful resort town in Southwest New Brunswick that will give you a chance to kick up your feet and relax.

Home to 280 buildings built before the year 1880, whale watching cruises, and one of the best public gardens in Canada, it is a charming place that will steal your heart within a matter of hours.

Stay at the historic Algonquin Hotel, which played host to Prime Minister Justin Trudeau and his new cabinet in a retreat that took place just after his party was elected to power in 2015.