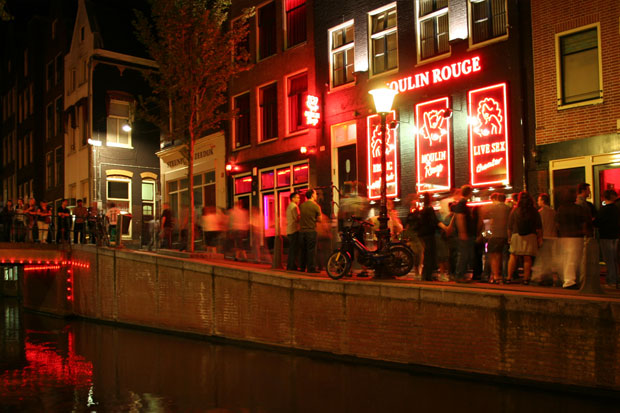 Trying to plan to perfect bachelor party? Your groom deserves a proper send off before tying the knot and there is no better place to do it than in Europe. Some of the planet’s wildest, loudest, sexiest, and most booze soaked cities are in the Old World. While there are dozens of epic stag party destinations in Europe, I’ve narrowed down a few of my favorite cities in Europe for bachelor parties.

Let’s start with the obvious, for reasons that need not be explained Amsterdam will not disappoint for a stag party. Though this Dutch city has much more to offer than smokey red lights. Why not go on a bicycle pub crawl to Heineken Brewery, no need to worry about a taxi, just try and stay out of the canal on your way back. If you are feeling up to it, why not try the one of Amsterdam’s famed absinthe bars and follow the little green fairy to the Van Gogh Museum, that’s an art scene even the stag party boys can get behind. Remember to soak up some of those liquids with some world famous Dutch frites (complete with mayonnaise!) Just make sure the groom keeps his hands off the coffee shop brownies if he is going to stay awake for his own party!

Slovakia’s capital city may not be everyone’s first thought when they hear “stag party,” but this hillside forest gem offers everything the boys need for an unforgettable time. Bratislava’s infamous pub scene and beautiful car-free cobblestone streets make it ideal for staggering. It’s not just the women of this city who are famed for their beauty (and mud wrestling,) Bratislava’s cityscape and greenery look  as if they were plucked from an antique postcard. Are you a little nervous about your wedding day best man toast? Bratislava just so happens to be home to one of the world’s oldest toast-makers clubs, the Toastmasters Club Bratislava is the perfect place to hone your skills or learn from the masters. When you feel like you need a little break from city or want to to relive the film Sideways, Bratislava is surrounded by some of Europe’s best wineries and with easy access from any major European city it is a breeze to go to Bratislava for the weekend.

Spain’s famous debauched beachside city is still one of the princes of the European bachelor party scene. Ibiza is rumored to have been the go to spot of ancient Roman emperors seeking unspeakable depravity, so why not follow in their footsteps! Drool worthy beaches and babes are enough alone to make Ibiza a hit for you and your bros. Ibiza is also world known for its club scene so save some of your energy for all night shoulder to shoulder dancing and brain numbing bass. The club seasons runs from May to October so make sure you plan your trip accordingly.

Europe offers countless options for your bachelor party and something to fit the tamest of tastes to those inspired by The Hangover. One last reminder, don’t forget to bring the bachelor boy back home with you!